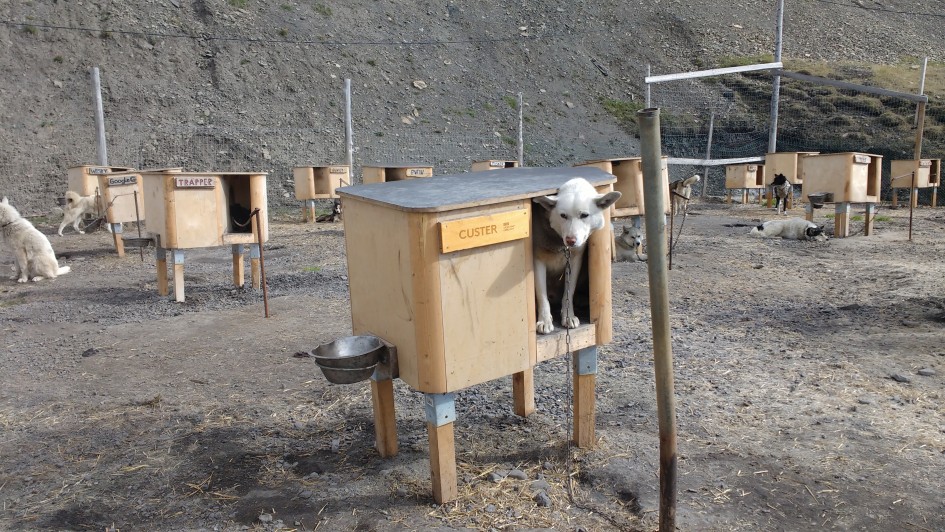 Husky At Base Camp

Monday morning began with making sure luggage was out in the hall early, a quick breakfast and waiting for disembarkation. Due to a very large cruise ship blocking the port, the poor expedition staff had to ferry not only all the people off the ship, but the luggage as well. Our cabin, being in the staff area, allowed us to be very close to the action the entire journey so while I did some last minute organizing, Fiona helped load luggage onto zodiacs. Eventually, I was able to join and it was actually nice to be doing something rather than sitting and waiting to be called to leave our expedition home. As Grosvenor Fellows we were asked to not be the first to sign up for anything and to be available if an extra person is needed. Fiona was called onto a zodiac about halfway through the process. I hung back and was one of the last three to disembark. Hugs and handshakes were given all around as we left the ship. The last hug on the dock was fittingly from Eduardo, our wonderful mentor on board. 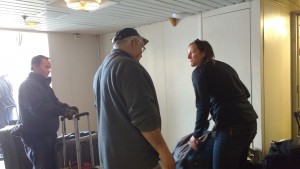 When we had finally set foot on stable land, Fen and I found there was no room on the last bus. It was full and we would be driven up to meet another bus that happened to leave with a few seats empty. We met them at the Longyearbyen Gallery and joined the tour. The gallery is a quaint little building with regional artwork with books and postcards for sale. I sat for a short film showing the Svalbard during the long winter nights, a contrast to our midnight sun voyage over the last week. So for those of you who have asked me about the Northern Lights…I did see them! On film.

After visiting the gallery on our own the tour guide gathered us to the bus and showed us around town. Longyearbyen is the largest northernmost town at 78°13′00″N 015°33′00″E with about 2,000 fluctuating residents mostly involved in coal mining, tourism, or the university. The Svalbard is a territory of Norway, and has a governor seated in Longyearbyen. 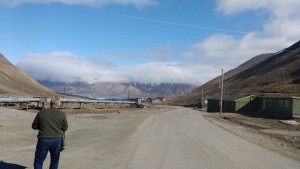 View of Longyearbyen from the Gallery

We drove past coal mines, two small buildings the size of sheds that are the only structures to survive WWII bombings, stopped at the northernmost church building, and at the Svalbard Museum. This is a wonderful stop if you are in Longyearbyen. Along with history of mining, trapping, and natural sciences, there were also interactive sections for the young, and the young at heart. You could crawl through a shaft like a miner, feel a variety of pelts and guess which animal they belonged to, or sit and listen to a good book in the comfy corner.

After lunch we journeyed to a place called Base Camp. Here you can go dog sledding year round, on wheels in the summer months. I must admit at first glance I felt rather sorry for the dogs. They were each chained to a little dog house elevated off the ground, presumably to keep them warmer. One of the workers agreed to talk about the dogs in an interview. It was a bit windy, sorry about that.

She also spoke of the Base Camp in Kenya where they are working with the local people to encourage tourism rather than poaching. They have won a few awards for conservation efforts. 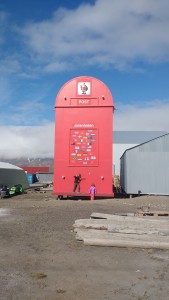 Did you know there is a postal box for letters to Santa in Longyearbyen? Longyearbyen resident, Po Lin Lee, built it in secret and revealed it just before Christmas in 2013. I’ve read that some locals don’t like it but others, of the short variety, have placed letters in there along with the many tourists that visit Svalbard. It is HUGE. Two of our young guests on the National Geographic Explorer demonstrate the immensity. Lee was quoted in an article on Icepeople.net, “I read them all.” That’s got to be a full time job. It’s actually not a true post office box and sometimes visitors put mail in thinking it is. She just hands it over the to post office and it gets sent, but not necessarily in a timely manner.

One more requisite stop on the tourist route is a sign just outside of town warning of polar bears ahead. 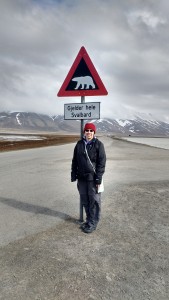 Warning To All of Svalbard

According to Wikimedia Commons, the words, “Gjelder hele Svalbard” mean this warning is for all of Svalbard. Outside of settlements you are required to carry protection, or travel with someone who has protection, in case you encounter a bear. When on land in Svalbard, the National Geographic Explorer staff carried a rifle and flares in case we came upon a bear. Of course, if bears were known to be near, we wouldn’t land. Not many people have been killed by polar bears, but enough have been to warrant the requirement to carry protection. I found this interesting document about guidelines for protection. Polar bears were hunted by humans until the early 1970s, but if you kill one now, it better be in self-defense after doing everything possible to avoid killing it. Humans are indirectly diminishing polar bear numbers enough as it is.

The last highlight of the tour was visiting the Global Seed Vault. Since 2008 many countries have been storing heirloom seeds in case of catastrophe. While I’m sure the catastrophes anticipated were natural disasters, the first withdrawal was due to war in Syria. While we weren’t able to enter, I did find this great video on the Seed Vault Website. 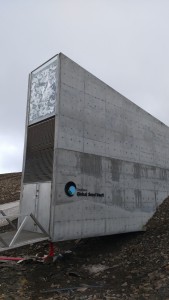 Out With the Old; In With the New

As we sat in the terminal at the Longyearbyen airport waiting for our flight back to Oslo, we witness the next set of Grosvenor teacher fellows arrive. I had waved through the window to get their attention but they didn’t see me. Fortunately the guard at the security check realized we were harmless and allowed Fiona and I to walk back through security to the arrival side of the building. We shared quick hugs and words of advice with Kathy, Jeanne, and Breanna before retreating back to the departure wing, giving the guard a very big smile and thank you. It was thrilling to see them at the beginning of a life changing week and I am very grateful to the wonderful man in uniform with a soft spot for reunions.

After landing in Oslo, some of us had a late night dinner and retired to sleep in our hotel beds that were blessedly stationary despite our bodies need to compensate for the ship’s movement. The next morning the passengers and some staff would go our separate ways with a week’s worth of new insight into our changing planet, our impact upon it, and for some of us at least, a renewed desire to leave a smaller footprint so that the animals and plants of the Svalbard will still be able to leave theirs.

Thank you to National Geographic and Lindblad Expeditions; specifically Sven Lindblad and Gil Grosvenor, for creating such a wonderful opportunity for teachers. Thank you also to Nina Page and Amy Berquist for choosing me to be part of this program. It has been a humbling experience so far and I hope to do my best with the assignments to come as a 2016 Grosvenor Teacher Fellow. 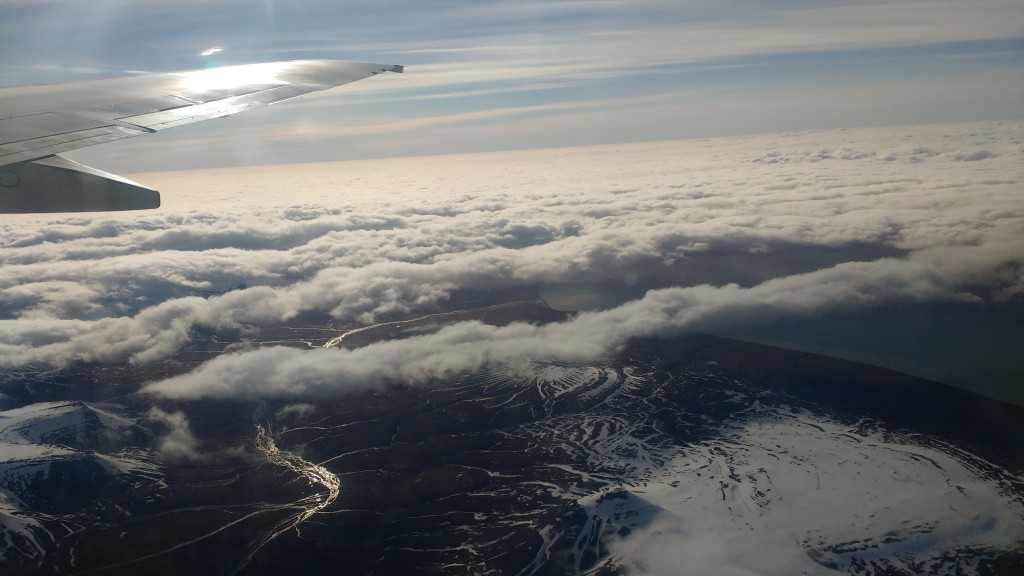