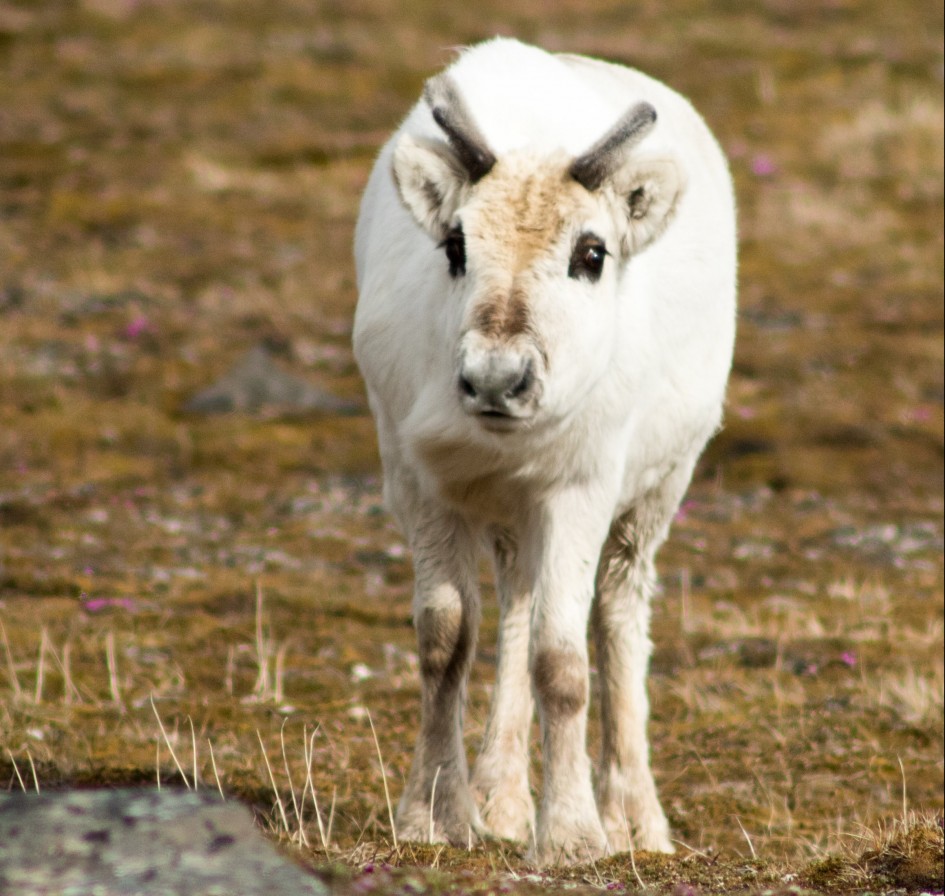 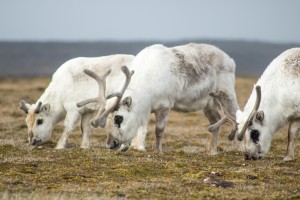 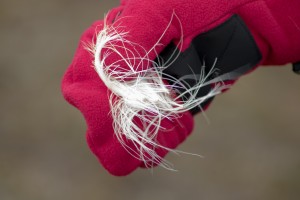 This morning we went onshore at Russebukta on one of the smaller Svalbard islands, Edgeøya. As with all our landings there were choices; long, short, medium, and photo walk. I chose the latter. There were mosses, flowers, and grasses. Rich, our naturalist, spoke of the permafrost underneath the flora. Permafrost is frozen soil and in the summer months the depth to which the permafrost melts varies, but is not deep. Therefore much of the water cannot penetrate the soil. There were little ponds here and there and when we walked on the moss it was squishy and water pooled around our boots. It felt like I was walking on one of those rubberized children’s play areas; almost bouncy. To my delight, there were three caribou (reindeer) grazing on the abundant tundra greenery. We walked towards them carefully so we wouldn’t scare them off. Rich had us approach as a group and to the side to help them keep an eye on us. One was a yearling, and so curious. It would walk towards us, check us out, and then bound back to its parents. Just like the polar bear cubs, it displayed much of the same behavior that human children do: curiosity, playfulness, and reliance on adults.

Svalbard reindeer are specific to this archipelago. They are stockier, have lighter and thicker fur, and shorter faces than other reindeer. They are the smallest subspecies of reindeer and the most northern species. In general reindeer male and females both grow antlers. The ones we saw still had velvet on the antlers.

This is a pretty cool fact about antlers: antlers are bone. While it is growing the antler is covered in what is called velvet, which is actually skin that uses blood flow to provide oxygen and nutrients to the growing bone. When the antler is done growing, the velvet is shed. Eventually the antlers fall off which is a result of bone decay at the base. The antler then becomes food for other animals on the tundra providing among other nutrients, calcium. Thank you Wikipedia again. We spotted several antlers on our walk today.

This particular spot was a perfect grazing ground for reindeer. They eat many types of plants but mostly search for grasses in the summer and lichen in the winter. When everything is covered in snow, they scrape the snow with hooves to find the buried lichen.

We stayed with the family for quite a while, partly because as we moved to walk away, they were moving too. It was joyous to tread in the tundra trailing three wild reindeer. Here are more from  Reindeer Facts National Geographic Kids. 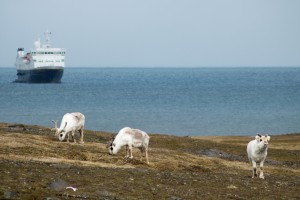 Svalbard Reindeer with National Geographic Explorer in the Background 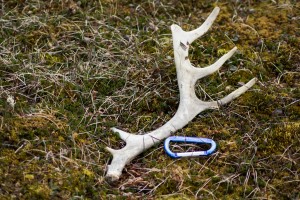 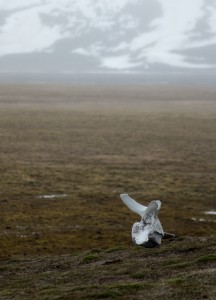 Whale Bone on the Tundra

The vastness of the region is apparent. As I walked I compared my surroundings to the Pacific Northwest. Everywhere you look in the northwest you see trees. It doesn’t matter where you are, mountain, prairie, beach, there are trees. In the Svalbard there are no trees. There are mountains, there are flat expanses, there are beaches, but there are no trees. It is such a stark contrast. Plants in the high arctic must by necessity grow close to the ground in order to stay warmer and to avoid wind to an extent. When we study plants and climate next year I will try to bring this knowledge back to my students. My brain is working on an activity to bring this to life for my kinesthetic learners. 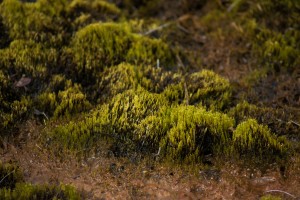 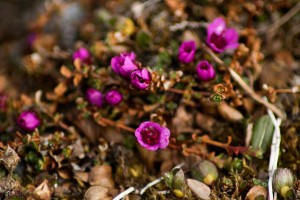 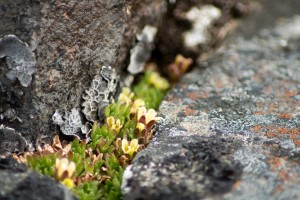 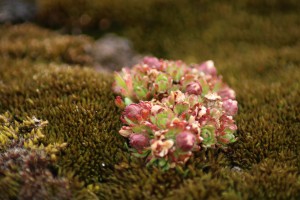 Saxifrage of Some Type 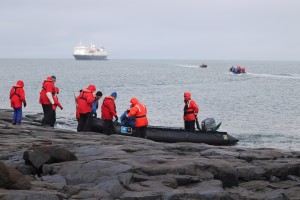 As we boarded the zodiacs to return to ship my mind started thinking more about the delicate balance of the Svalbard ecosystem. The birds fertilize the plants which the reindeer eat; the antlers feed smaller animals like lemmings, which in turn feed birds like owls. The farther along I am on this expedition the more I am thinking about how to bring this all back to the classroom. Last year, Rachel from the ESD, came to some of our classes and did a food web activity with the kiddos. I may have to borrow her idea. She gave each student a picture of either flora or fauna. Starting with plants and moving on up the chain students were able to visualize how a web can be formed using a ball of yarn. As each picture was “eaten” a new connection in the web was formed. What happens to the web if we take out one of those connections? What if there are too many bears and not enough seals or access to seals? 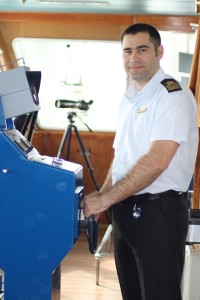 Yuri Posing for the “Navigator” Photo

Yesterday there were several attempts at walrus watching but at every turn there was something or someone blocking the way. So today, when the announcement came that we would be landing to spy on a walrus colony sunbathing on the beach, excitement buzzed throughout the ship. Not everyone could go at the same time due to the nature of the landing so we went in shifts. While waiting for my turn I was able to talk to one of the officers on the Bridge. I believe his name is Yuri and I am quite possibly spelling it incorrectly. He was nice enough to show me some of the tools he uses to navigate and let me take his picture for my students. We study exploration in the spring and one of the vocabulary words is navigator. I now have first hand experience being in the navigational center of the ship! I will be a rock star among the five year old set. 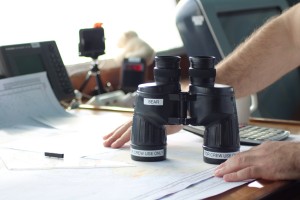 Tools of the Navigational Trade

We had to zodiac out to the landing point and then quietly walk up to the viewing area in small groups. Magnus informed us that if we scared them off there would essentially be a stampede and some would get hurt. Even the smallest among us, I believe he is four years old, kept pretty quiet, and pretty far back. The walrus were lazing on the beach digesting after feeding. Walrus eat animals that live on the seabed like mollusks and crustaceans. They find dinner using their long whiskers and then suck out the meat from the shells. Walrus are eaten by polar bears and orcas. At one time they were hunted profusely by humans. The area is littered with walrus bones from over a century where the animals had once been “processed”. Traditional hunters used all of the walrus for survival, commercial hunters over hunted for oil, skin, and bone (ivory). Today, only a select few are allowed to hunt walrus and it is extremely regulated. To see so many calmly relaxing on what once was a killing ground is remarkable. 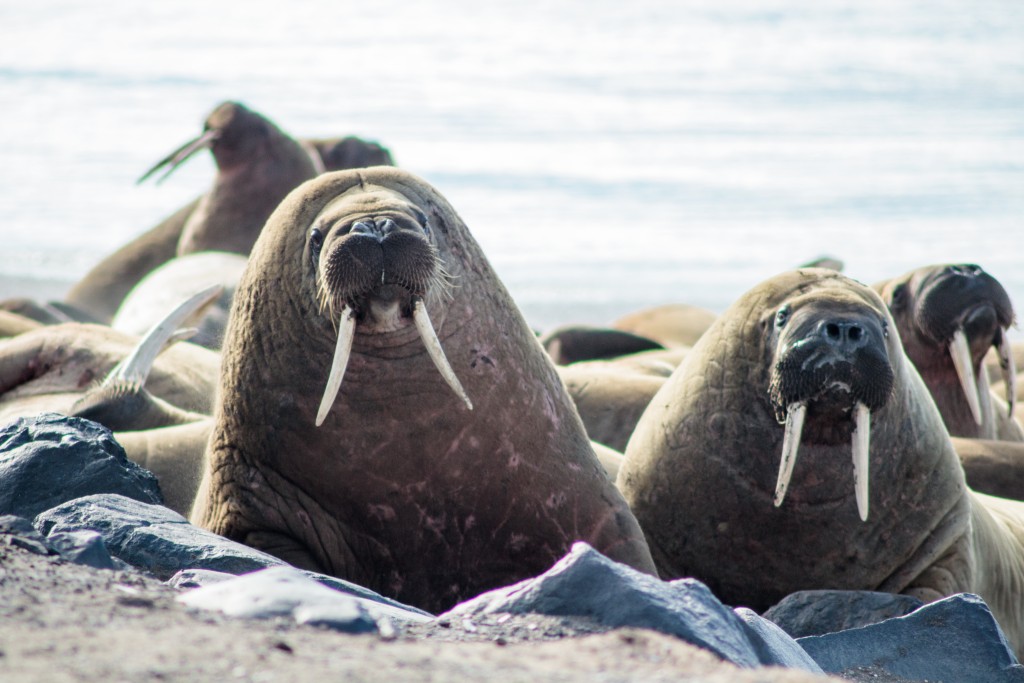 Walruses Digesting on the Beach

As we observed the roiling mass of brown blubbery masses, every once in a while, one would blow out its nostrils and spray moisture everywhere. Birds were squawking at each other and the walrus were snorting and bellowing as they rolled around to get a better position. Their huge tusks are very useful teeth and are sometimes used to help move along the beach and to pull up on ice. Sea ice is as important to the walrus as it is to the polar bear. They give birth to and nurse their babies on ice floes. If there isn’t enough ice then they have to leave the babies on land and this in turn leads to overcrowded beaches and depleted food supplies. Most marine mammals stay warm because of the layer of blubber insulation. When we study the five senses and/or weather I would love to do the Blubber Experiment to demonstrate how blubber can keep you warm. Here are some Walrus Facts from National Geographic Kids. 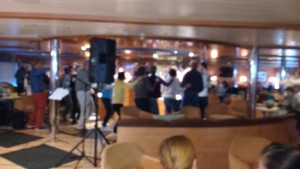 Blurry Photo of Spice Boy Concert in the Lounge

There was a special concert in the lounge this evening, performed by Doug, one of the naturalists, and “The Spice Boys”, comprised of Jeffrey, Joel, and Freddy who are all part of the wonderful staff on board the National Geographic Explorer. The choice of songs was eclectic ranging from my mother’s generation to my son’s. What a wonderful show! I was toe tapping and singing along. The lounge was hopping and my brain was working. While enjoying the music I was finally able to start writing down some ideas for bringing the Arctic back to the classroom. It was a perfect end to a fulfilling day. 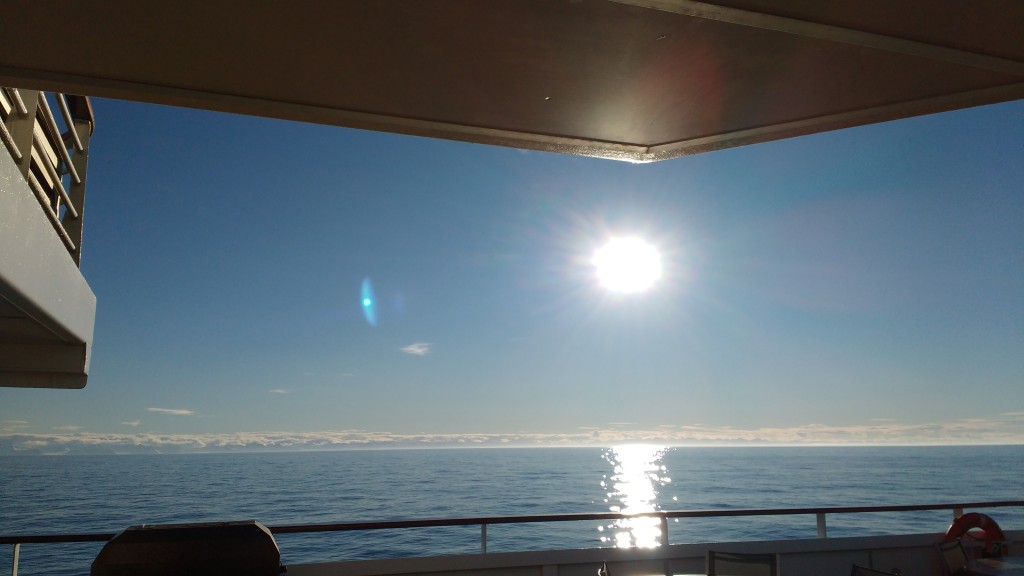