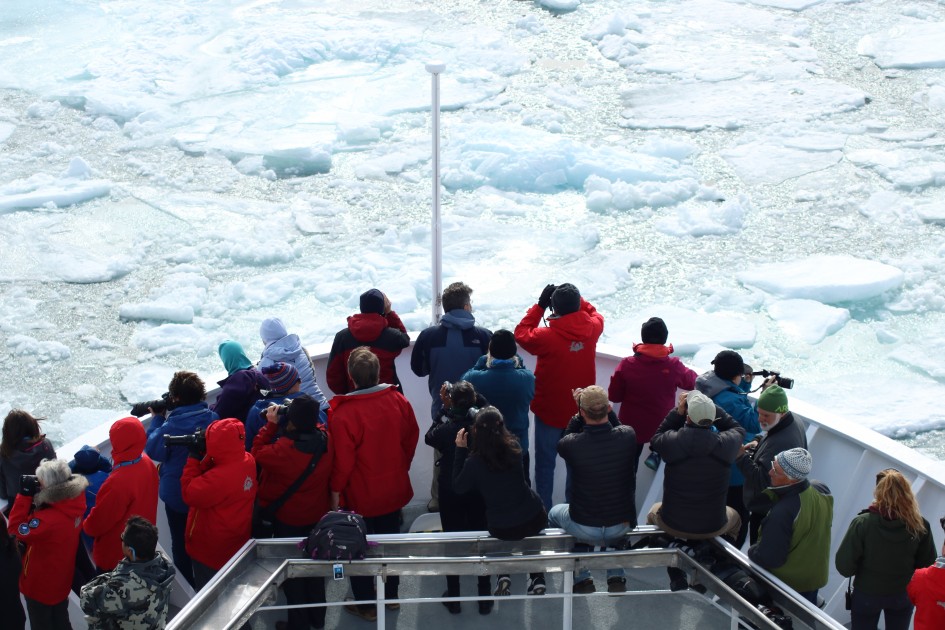 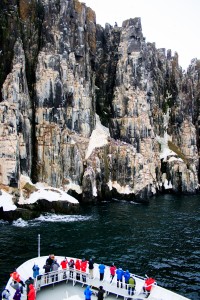 Friday was a day spent on the ship searching for wildlife as we traveled through the Hinlopen Strait which separates the largest island in the Svalabard, Spitsbergen, from the second largest island, Nordaustlandet. It was not hard to find wildlife at six in the morning as the captain steered us right up to the Alkefjellet, translated bird cliff, at Kapp Fanshawe. 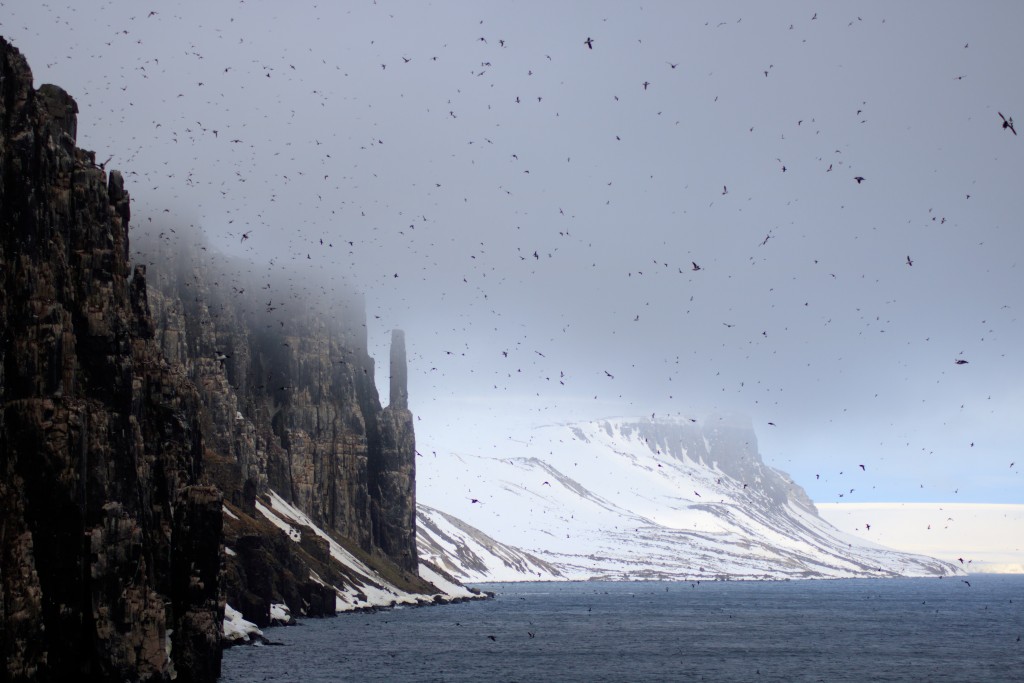 There were so many birds it would be impossible to count them all; kittiwakes, guillemots, skuas, gulls. There aren’t really nests per say on the cliff edges, they just lay the eggs on the rocks. Both parents incubate and feed the chicks once hatched. For the most part, birds lay eggs on cliffs because it is a predator free zone. There are exceptions, especially during the transition from ledge to sea.

These were the same cliffs where the BBC filmed Frozen Planet, an excellent documentary that I’ve watched several times leading up to the expedition. In the documentary arctic fox waited at the bottom of the cliffs waiting for fledgling guillemots to fall to the ground as they took their first flight. Guillemot chicks leave the nest between two and three weeks after hatching. They are still a bit downy and cannot truly fly. They flutter clumsily down to the water, and if they fall short, plummeting to land instead, the fox snatch them up for dinner. Fortunately for the birds, we did not see any fox today, although it is nowhere near the time for the birds to try to get to the sea. Once they are floating in the water, the chicks are taken care of by the father for up to two months.

We also witnessed a skua attacking guillemots. As I observed this behavior I wondered if it was to take their fish or to eat the birds. According to Wikipedia, it could have been either one.  Fun fact: taking another bird’s catch is called kleptoparasitism. Hmmm…bird thieves.

One other interesting fact I learned from one of the naturalists is this: birds on the ledge observe to see which direction returning birds with successful beaks full of fish came from. They will then fly in that direction to search for fish. That seems pretty intelligent to me.

Flying birds are really hard to photograph. They are SOOO fast. It was a bit easier when they were flying parallel to the ship rather than back and forth and all around it. Rich and I stayed out long after everyone had left in order to continue photographing. Word to the wise, keep your mouth closed while looking up. Fortunately, the birds did not give me any presents. 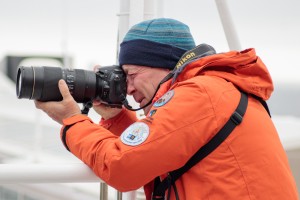 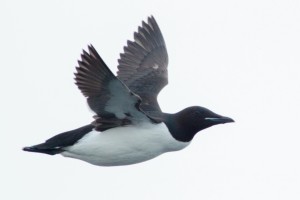 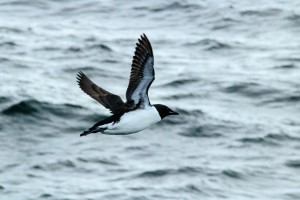 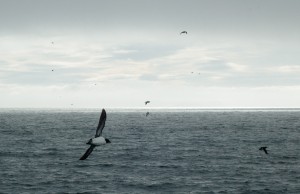 Flying with the Ship

It was a running joke on the expedition that the surest way to produce a wildlife sighting is to have someone begin a lecture in the lounge. Rich Reid tried to give his, On Assignment With National Geographic, lecture several times today but kept getting postponed or interrupted. Wildlife trumped presentations, especially the furry white variety. 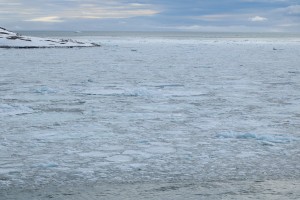 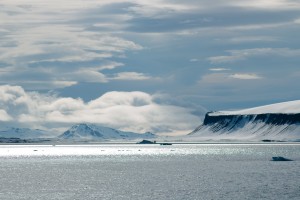 There were several polar bear sightings again today in Bjørnsundet, Bear Sound. They were pretty far away though, only visible by binocular or telescope. I feel like we were spoiled with the first few sightings as they came so close to the ship. Even through my telephoto these recent sightings were the size of ants. I did see a seal or possibly walrus (too far to tell) through a telescope. I feel like I have so much to learn in so little time. I will be continuing my studies well after I return from this expedition. My mind is starting to brew ideas for connecting this expedition to classroom learning. 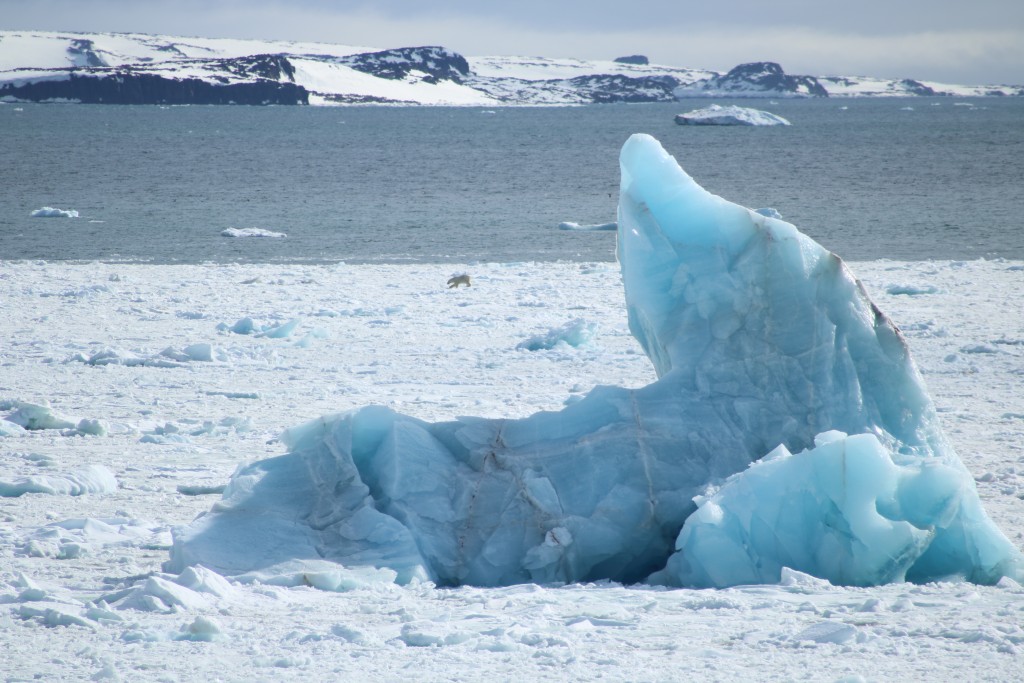 The evening delight was the Austfonna Icecap, also mentioned in the Bergy Bits post. It covers a good portion of the island, Nordaustlandet. We only skirted the southwestern glacial snout called Brasvelibreen, and it seemed like we were out there for hours. The sun was out and it felt rather warm on the bow as the ship moved slowly along the glacial front. The dessert to this main course was edging right up to an iceberg where everyone could get an up close and personal look, and take a selfie or two. It was a perfect end to an eventful day. 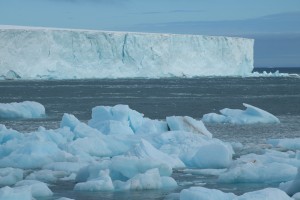 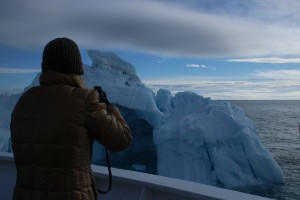 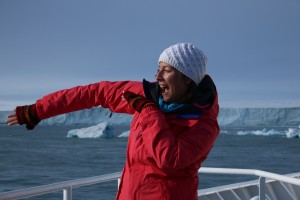 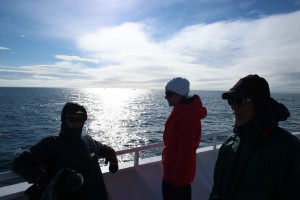 Hanging Out on the Bow After an Amazing Arctic Evening