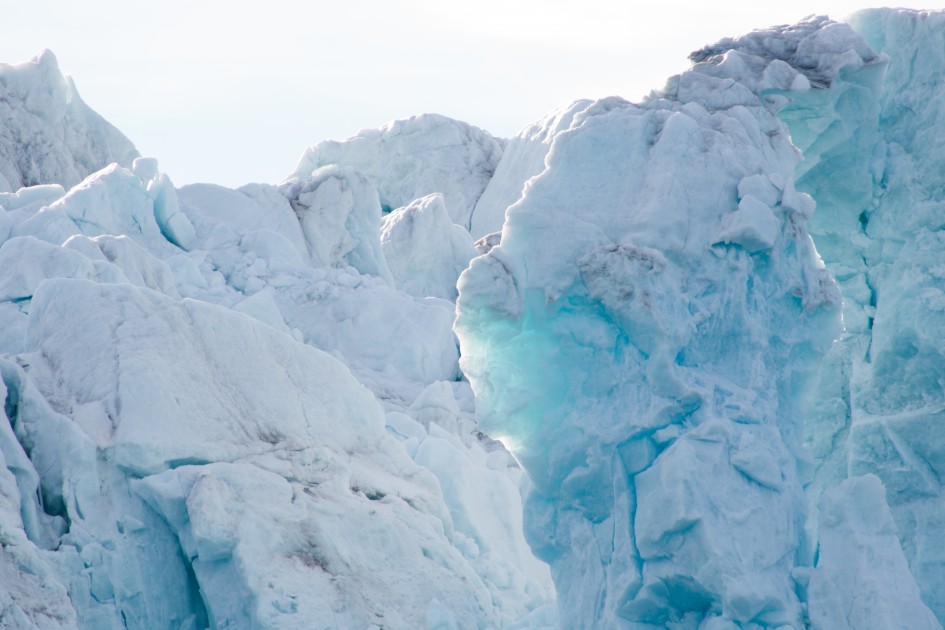 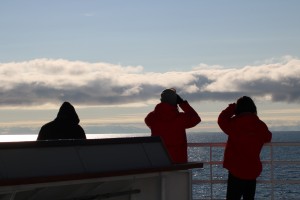 At six a.m., Lucho, our expedition leader woke us up with an announcement of whales; blue and fin. The National Geographic Explorer was out in open Atlantic waters on the west coast of Spitsbergen where shallow waters meet a drop off next to deeper waters. Our captain had brought us to a place he knew we would see whales! They come to the Arctic to feed on the abundant krill and small fish. Both types of whales are baleen; they filter-feed through bristles. A baleen whale opens its jaws to take in water and then pushes the water through the baleen leaving food behind to be swallowed. Think of baleen like a strainer. Blue whales are the largest and fin whales are the second largest whales. Blue whales can be 82 feet long and up to 144 tons! In comparison, a school bus is no longer than 45 feet and elephants weigh about 5 tons. So a blue whale is as long as almost two school buses and weighs as much as 28 elephants put together. Wow. Fin whales can be up to 71 feet and weigh up to 50 tons! So, a fin whale can be compared to a bus and a half in length and 10 elephants in weight. These are giant creatures. I also learned that blue whales can communicate over thousands of miles. Could I add them into the five senses unit for hearing? 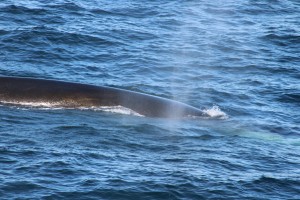 In my hurry to see the whales I failed to put on my motion sickness prevention method, Sea Bands. I was only up there long enough to take a few pictures of two fin whales off the bow and then promptly feel sea sick. Note to self. Always wear your Sea Bands. I took some Dramamine which knocked me right out and I believe I slept through a presentation about the internet. I did however make it to the mandatory safety briefing about zodiacs and kayaks.

In the afternoon we were finally able to get off the ship and onto land. We had journeyed into Krossfjord and then into an offshoot where we landed at Stefan’s Garden. There were varying difficulties of walks offered to accommodate passenger needs. Before leaving the ship the staff checked the shore to make sure it was bear free. We would not get off the ship if there were bears. Whenever on shore, our guides had to carry bear protection gear with the hope of not needing to use anything more than a flare to scare. We were to stay with our guides at all times, no lagging behind. I chose the medium walk thinking that it would help me figure out what their definition of medium vs long was. 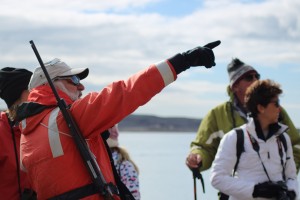 Eduardo Teaching Us About the Birds

Our guide on this walk was Eduardo. I was impressed with his wealth of knowledge and his willingness to let me record him for my students. I was surprised by how barren the arctic is. From photographs of close up animals and plants I assumed that there would be wildlife everywhere you turned around. In reality, the only abundant life I observed were birds. The expert birders in the group could identify every bird that flew by. To me, all the white ones looked like seagulls, which they are not. There are gulls though; ivory, Ross’, Sabine’s, and Glaucous gulls. My goal is to be able to identify one bird without help before the expedition is over. So far, I’m not doing so well. I had to ask Doug, one of the naturalists, to identify the birds I photographed today. 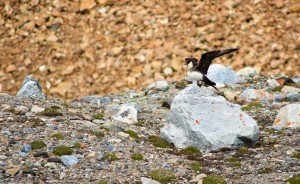 On our walk we did not go to the side where most of the fauna was growing but we were able to see jewel lichens, many tiny purple saxifrage blooms, and one lone whitlow grass blossom. I used my RPS carabiner to show just how small these plants are. I thought it was apropos considering it says, “We are linked,” and that fits exactly with my thoughts about Arctic wildlife. 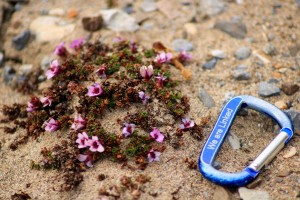 According to Dennis they are small and short to conserve energy which helps them to grow in the harsh Arctic climate. The purple saxifrage also has pistils and stamens on the same blossom so pollination is easier. There are few insects but wind does help with pollination. Due to the abundance of birds and “fertilizer”, the plants grow well under nesting cliffs. I can use that in our plant unit! It’s amazing that anything can live up here at all, but there are natural systems in place that allow the wildlife to work together to survive. 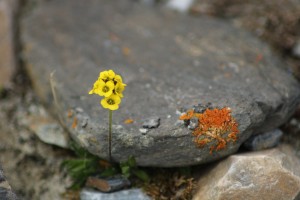 I was able to use my new 360 camera at the beach and many of the passengers were curious about it. I bought it after learning about it at the April D.C. training. While I knew there was one in the teacher bag on board, I wanted to be able to use it in Norway on my “vacation” leg of the trip. The coolest thing about it is being able to pull up the image with a virtual reality viewer which allows my students to stand there with me. When they turn their heads, the image turns too! I can’t wait to bring the Arctic back to my kiddos! 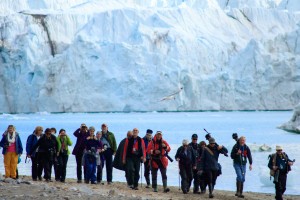 The Long Walk to the Glacier at Stefan’s Garden

Back on the ship, after a lovely dinner, the captain brought us to Lilliehookbreen where we spent a lovely late evening. I took the opportunity to interview one of the naturalists, Doug, talking about the blue ice. There are so many terms for ice here by the way. So much so, that I wrote a whole post about just ice. I just need to remember to keep my Sea Bands on so I can focus on learning.

For more information about ice go to, “Bergy Bits and Other Ice Terms.”