May I Record You Please? 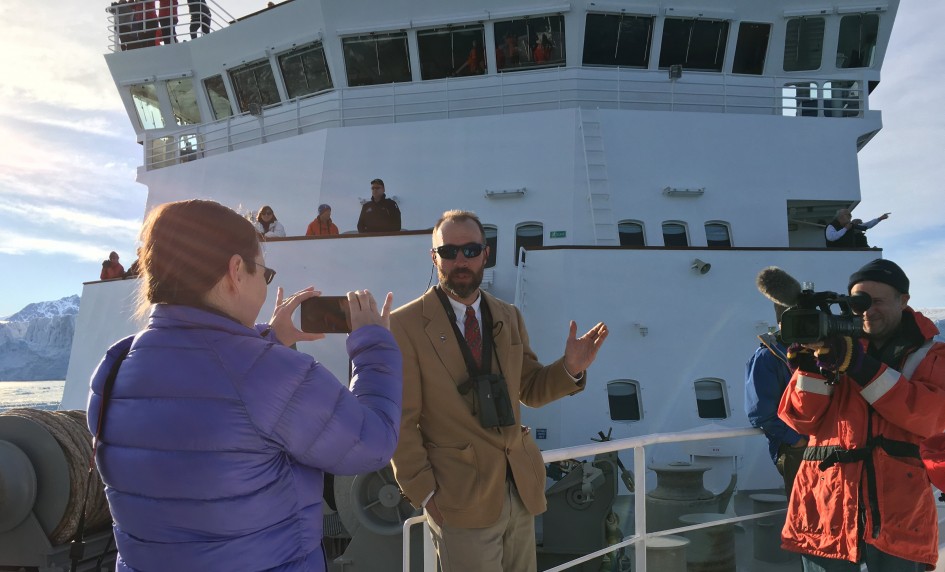 Being filmed by Videographer David while interviewing Doug about blue ice. Photo Courtesy of Fiona Hall

Before leaving on this incredible Arctic adventure I elicited questions from students to be answered in part by experts on the National Geographic Explorer. These experts, called naturalists, were able to answer almost every question I put before them and were willing, for the most part, to be recorded answering some as well. About mid week I started to realize what I was truly asking of them.

As part of the Grosvenor Teacher Fellowship, the ship board videographer, David, recorded me speaking about the whole experience. I have never been so tongue tied. Finally he asked, “Would it help if I gave you the questions beforehand?” Our discomfort must have been very obvious. Getting the questions in advanced did actually help, not only to solidify what I wanted to say, but also get my brain thinking about what I needed to do for next steps on assignments due a few weeks after the expedition. Even with preparation it was still nerve wracking to be recorded.

I approached the rest of the week’s interviews with a new found respect for those that allowed me to record them. Thank you, thank you, to Rich, Eduardo, Rich (there were two), Carl Erik, Doug, Adam, Alyssa, Magnus (the ice pilot – there were three men named Magnus on board!), Scott, Dennis, our tour guide in Longyearbyen, and the tour guide at Base Camp. It was an honor to work with them and my brain is full of new knowledge to share with my students.

One other important thing I learned is to hold the camera (phone) horizontally, not vertically. A few of the videos will be viewed sideways, sorry. Here is Eduardo, recorded vertically since it was my first. The rest will be posted on corresponding posts. I had so many penguin questions from students, I thought this one would put those to rest. Thank you Eduardo.

One last note. David has inspired me to record more AND get my students recording. This past year the students and I created a digital book complete with stop-motion-animation. Maybe next year is the year of video with the students conducting interviews of each other and staff. I will have to figure out how to get a kid proof camera into the classroom. Hmmm…..